What is First Aid Treatment?

First Aid Treatment is the immediate caregiving to the injured or suddenly ill person.

First Aid Treatment does not take the place for proper medical treatment it consists only of furnishing temporary assistance until Competent Medical care.

If needed is obtained or until the chance for recovery without medical care is your most injuries and illness require only first aid care.

In order to provide good first aid, a person should be able to identify a victim’s injury, allergic reaction, or sudden illness and its seriousness to find out what is wrong and how expensive it is the First Aider should follow a systematic approach known as a victim assessment.

A victim assessment attempts to:

A victim assessment of either an injured victim or a medically ill victim is divided into two steps:

Electric shock is received when a human being comes into contact with live wires as a result of the contact current flowing through his body.

The severity of shock depends upon the magnitude of the current duration of contact with the live part, Part of the current through a human body, and the type of supply.

In case of a High Voltage supply where it is not possible to break the contact of the victim it may become necessary to short circuit the live wire by improving the chain over them this will cause a short circuit which will trip of the line at the substance thereby making the line dead.

When a person gets electric shock most often current affect the breathing center at the base of the brain and causes the center to stop sending out the nervous impulses which act upon the muscle responsible for breathing as a rescue breathing stop abruptly.

In some cases there for after disengaging the victim from main next step is to start rescue creation or Artificial respiration like performing CPR and giving SOS calls to the nearest doctor there have been cases where natural respiration is restored after 8 hours of continuous circulation we will now describe here only three different methods of artificial respiration:

This method of artificial respiration is a better method and should be followed unless it is not possible to make the victim lie on stomach due to burns in that eventually Silvester’s method of artificial respiration is adopted in the first method the victim is lead on the stomach with a face on one side neck on the victim should be made free from clothing and mouth cleared of all foreign material such as Tobacco Pan and false teeth if any so that they do not Chock the winding passage.

The rescuer should Nnee over the victim placing his both hands flat on the back in such a way that the thumb nearly touches the finger are spread on each side of the victims lower rib now the rescue which his elbow straight should Linn family but gently forward over the victim bringing the weight of his body over that of the victim thereby accepting downward pressure during this expiration operation pressure is applied to the victim.

This method of artificial respiration is resorted to when the victim has got buns or some injury on his front side and the capers method cannot be adopted in this method the victim is lead on his back and clothes are loose around his neck chest and stomach roll up a quote for another improvised pillow in place net the shoulders of the victim so that his head Falls backward.

In this position it is likely that the tongue of the victim may go back and block the windpipe it, therefore, becomes necessary to keep the tongue of the victim drown forward which the help of a handkerchief the rescue should not nil In the position grasping the victim just below elbows draws the arms of the victims over his head until horizontal retaining them therefore about 2 seconds during his inspiration operation chest expand and lungs have to inflate effect.

During the next expiration operation victim’s arms and brought down on each side of the chest by the rescue pressing in word upon it and learning upon his arms so as to compress his chest and remaining in this position for 2 seconds above operation are repeated at the frequency of 15 times per minute.

In this method, the victim is placed on his back with head slightly Downhill if possible this is achieved by placing a folded court or similar object under the victim’s shoulder head or the victim is tilted back so that is the chin. Straight upward.

Victims a jaw is then grass and raised upward until lower teeth are higher than * teeth jaw position is maintained throughout rescue nation period to prevent the tongue from blocking air passage rescuer will then take a deep breath and place his mouth over victims mouth making airtight contact victims nose is pinch by Thumb and for the refiner, the rescuer will then blow into the victim’s mouth until his chest Rises rescuer will then remove his mouth to allow the victim to exhale.

The First 8 to 10 breadth should be Rapid as the victim will respond thereafter rate should be followed to about 12 times a minute to avoid direct contact with the mouth of the victim a cloth can be used this method is more effective as it supplies comparatively more volume of air and is there for gaining ground.

Read this:- What is Safety Precaution in Workshop 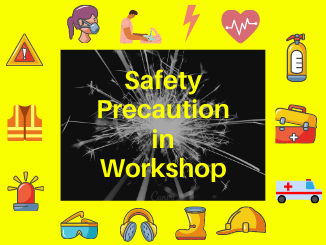